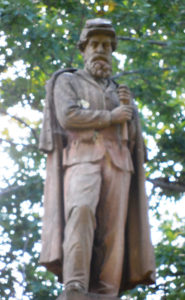 Here’s another story about the history that is Deerfield: We have on the village green by the well one of the first Civil War monuments in the state. The beautifully carved 6’ statue of brown freestone cost the then tremendous sum of $4,000 and was dedicated on September 4th, 1867. The Mass Department of Veterans Services put up half of the cost of the monument’s restoration which will amount to $8,000, plus the donation of in-kind work.

The soldier is up on an 8’ pedestal and has lost his rifle. He stands so thoughtfully with one foot forward, the butt of the rifled musket between his feet, his hands left over right around the missing muzzle, accoutrements and bayonet suspended from his waist belt, and the coat’s hood falling over the shoulders as a cape. The soldier’s sleeves are slightly billowed, he has beard and whiskers, and a uniform hat like a floppy kepi.

I have been told that this infantryman follows the classic Antietam design of that time. Wish I could scramble up there to get a better look!

The front of the monument has the following inscription:

DEERFIELD
ERECTS THIS MONUMENT
A. D. 1867

THEIR PRECIOUS DUST IS SCATTERED
ON MANY BATTLEFIELDS, OR WAS HASTILY
BURIED NEAR SOME LOATHSOME PRISON PEN:
BUT THEIR NAMES ARE HERE PERPETUATED.
AND THE MEMORY OF THEIR BRAVE DEEDS
AND WILLING SACRIFICES SHALL BE CHERISHED IN
OUR HEART OF HEARTS SACREDLY AND FOREVER.

The left and right sides of the monument list the names of those who served and died.

The Deerfield, MA history is fascinating, making our Deerfield, Massachusetts bed and breakfast the perfect getaway for for history buffs!

To Our Valued Friends & Guests…

Welcome back to The Deerfield Inn. We are so excited to share with you the charm and warmth of the Inn and all of Historic Deerfield’s natural beauty. We want to reassure you that our first responsibility and top priority is the safety and well-being of each of our guests, as well as our team. Please take a moment to review our new wellness measures which are in place for your visit to the Inn. Should you have any additional questions, please contact us directly.

• The Inn is an ideal location to practice physical/social distancing due to the property’s location in beautiful Historic Deerfield. The entire property has been deep cleaned and sanitized and multiple cleanings continue throughout each day. Hand-sanitizer is also available throughout the Inn.
• Guests and team members will observe recommended distancing protocols.
• Personal protection equipment (PPE) amenity kits featuring disinfecting gel, nitrile rubber gloves and masks will be provided upon request for guests.
• We will comply with, or exceed, local or state mandated occupancy limits.
• All team members will receive training on COVID-19 safety and sanitation protocols with more comprehensive training for our teams with frequent guest contact.
• All team members will be wearing masks for their safety and the safety and comfort of guests. The health of our team members is carefully monitored on a daily basis.

• Industry leading cleaning, Ultraviolet Lights and sanitizing protocols are used to clean guest rooms, with particular attention paid to high-touch items.
• Two levels of housekeeping services will be offered to each guest:
o Housekeeping Limited Service: Our team will access your room once daily to provide service and restock linens and amenities.
o Housekeeping Drop Service: Your fresh linens and towels along with any other requested amenities will be packaged and placed at your door upon your request.
• The frequency of cleaning and sanitizing has been increased in all public spaces with an emphasis on frequent contact surfaces.
• The frequency of air filter replacement and HVAC system cleaning has been increased and fresh air exchange will be maximized.

• New service options include Dinner on the Lawn, Porch, Terrace and In-Room Service.
• Curbside pick up will be available for To-Go orders.
• Seating capacity has been reduced in Champney’s Restaurant& Tavern based on CDC recommendations.
• At the completion of a dining service, the table, chairs and menus will be sanitized prior to the next seating.
• The spacing of tables has been adjusted to allow for six feet between tables

Wellbeing Plan is subject to change based on guidance from the Center for Disease Control, MA Department of Public Health, American Hotel Lodging Association and all other applicable government authorities.