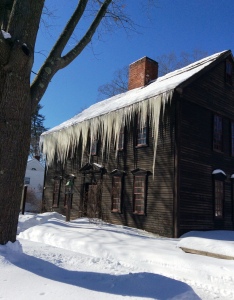 We think it is absolutely freezing and the worst ever, but almost 300 years ago, in 1717, so much snow fell in New England that for generations afterwards people would talk of events as before or after the Great Snow.

According to The New England Historical Society, drifts were as high as 25 feet so houses were entirely covered with just a wisp of smoke showing their location.

The deer population was decimated, and much livestock perished, but many farm animals survived under the snow. It seems that hens could live a week, turkeys for almost three weeks, and cows were also dug out and incredibly restored to health.

Being a fan of pigs, it was good to know that it was recorded that a couple of pigs lived together under a snowbank for 27 days, munching away on tansy, a herb grown to repel insects, delay spoilage when rubbed into meat, and as a dye of golden-yellow. (In Europe we still put tansy out on windowsills to keep ants and flies away.) Go pigs!

People made tunnels and paths through the snow from house to house, and according to the abolitionist Joshua Coffin in The History of Ancient Newbury, Abraham Adams walked three miles to visit his new bride Abigail who had had to hole up with her family to wait out the storm. He was able to clump right in through the window on the second story, and guess what – their first child was born just about nine months later.

So really the snow in Deerfield is not so bad in comparison. Come on over for a while and Date Your Mate!