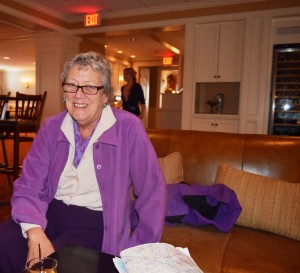 We are always interested in oral history of the Inn’s past. We have heard stories of historic Deerfield from a woman on a coach group trip from a senior center who told us of the summer months when she was a little girl visiting her grandmother, the cook at the adjacent Stebbins House. Another guest told us that when he was just a lad, he remembers cages of songbirds in the fireplace lobby!

Recently we met Joan Harlow whose parents were innkeepers here for fourteen years from 1950. She grew up in Deerfield until she went to Emma Willard, and the home her parents built is the current administrative offices of Historic Deerfield behind the firehouse. When they first arrived they lived in the Pratt House just to the south of the inn, which was once where brooms were made and is now the Museum Store.

Joan remembered when Eleanor Roosevelt arrived very humbly by taxi – no limo for her with flags fluttering. Jack Harlow was a staunch Republican, but he was charmed by Mrs. Roosevelt’s passion to preserve Deerfield as a gateway to the past.

The restaurant menu was the same for an entire week, and until Joan’s mother Ruth could persuade the Flynts to let them eat in their own small private dining space, they would have a choice of baked ham, broiled chicken, tinned Sexton’s vegetables, and a relish tray with cottage cheese, pickles, and spiced crabapples day in, day out, in what was a very formal dining room until the flood of Irene gave us the opportunity to change all that. On Sunday it was roast beef for all, and on Monday the weekly menu would be in place again.

There was no elevator then, and no keys to the rooms, which unnerved metropolitan guests. The Deerfield Inn was the call center for fires, and Joan was filled with trepidation every time that red phone rang.

When Samuel Chamberlain came to take photographs for Historic Deerfield: Houses and Interiors by Henry N Flynt, Joan was allowed to watch him at his work and hold up the camera lights.

Joan also had a memory of being asked to run, run like the wind, back to the inn to “get the Ballantine’s out of the fridge.” She brought back a bottle of ale, not knowing it had to be chilled scotch for a certain somebody I shall not name!

How what we eat has changed. How odd to open tinned vegetables when this valley is bursting with produce! Anybody else have any recollections of Deerfield that I can add to my memory bank? I would love to hear your stories…