+ Between Horse and Car :: Deerfield Inn 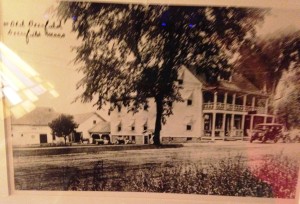 As you perhaps know, the inn opened its doors in July 1884 with all sorts of drama in the Valley – a plague of locusts, a drought, but visitors came and stayed nevertheless. It seems that business was so promising that George Arms, a local builder, was invited the next year to extend the property to the north. Old photos on the walls in Champney’s show there was a porch that ran all around that side. Another photo we found that showed the original placement of the front desk meant we could return it to where it has always been. We call it the Harry Potter room because it is a small space and under the stairs!

Recently we discovered that the stables and carriage house were built a year before the inn was opened. It makes sense, really – that there had to be somewhere for the horses to be stabled and the carriages to be stowed away.

Rather charmingly, the names of horses are on a long support beam that runs above where the stalls used to be. These might have been the horses that worked the fields around here, or perhaps one or two of them would be harnessed up to make the run to the train station to pick up guests and their luggage.

Their names were Fanny, Bonnie, Patsy, Donald, Frank, Harry, Pilot, Tom, Kate, and, fancifully compared to the others – Dinamint.

One of my favorite photographs in Champney’s is hanging to the left of the fireplace. It shows the transition between motorized and horse-drawn conveyance. Two cars are out on the street in front of the inn, and two are down to its south side on the driveway. Seated guests are looking out from the front porch, but at the back of inn, behind the rather splendid cars, you can see an unharnessed horse being groomed just by the stables and the carriage house. Lovely.

Join us at Deerfield Inn and see the amazing history of our property!

To Our Valued Friends & Guests…

Welcome back to The Deerfield Inn. We are so excited to share with you the charm and warmth of the Inn and all of Historic Deerfield’s natural beauty. We want to reassure you that our first responsibility and top priority is the safety and well-being of each of our guests, as well as our team. Please take a moment to review our new wellness measures which are in place for your visit to the Inn. Should you have any additional questions, please contact us directly.

• The Inn is an ideal location to practice physical/social distancing due to the property’s location in beautiful Historic Deerfield. The entire property has been deep cleaned and sanitized and multiple cleanings continue throughout each day. Hand-sanitizer is also available throughout the Inn.
• Guests and team members will observe recommended distancing protocols.
• Personal protection equipment (PPE) amenity kits featuring disinfecting gel, nitrile rubber gloves and masks will be provided upon request for guests.
• We will comply with, or exceed, local or state mandated occupancy limits.
• All team members will receive training on COVID-19 safety and sanitation protocols with more comprehensive training for our teams with frequent guest contact.
• All team members will be wearing masks for their safety and the safety and comfort of guests. The health of our team members is carefully monitored on a daily basis.

• Industry leading cleaning, Ultraviolet Lights and sanitizing protocols are used to clean guest rooms, with particular attention paid to high-touch items.
• Two levels of housekeeping services will be offered to each guest:
o Housekeeping Limited Service: Our team will access your room once daily to provide service and restock linens and amenities.
o Housekeeping Drop Service: Your fresh linens and towels along with any other requested amenities will be packaged and placed at your door upon your request.
• The frequency of cleaning and sanitizing has been increased in all public spaces with an emphasis on frequent contact surfaces.
• The frequency of air filter replacement and HVAC system cleaning has been increased and fresh air exchange will be maximized.

• New service options include Dinner on the Lawn, Porch, Terrace and In-Room Service.
• Curbside pick up will be available for To-Go orders.
• Seating capacity has been reduced in Champney’s Restaurant& Tavern based on CDC recommendations.
• At the completion of a dining service, the table, chairs and menus will be sanitized prior to the next seating.
• The spacing of tables has been adjusted to allow for six feet between tables

Wellbeing Plan is subject to change based on guidance from the Center for Disease Control, MA Department of Public Health, American Hotel Lodging Association and all other applicable government authorities.